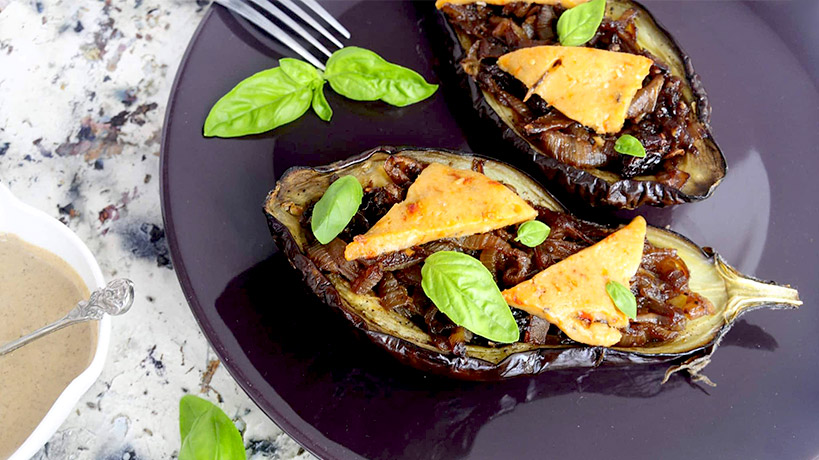 The eggplant continues to be one of my biggest culinary temptations during the summer. It is so delicious that I want to experiment again and again with new recipes, so thet we can eat it as often as possible. Today I created something which will make you lick not only your fingers but even your plate.

Cut the eggplant in halves lengthwise. Spray it with olive oil, salt and pepper. Roast it for about 40 min – until tender.

After it is cooked stuff it with caramelized onion and place thin slices of Delishu on top. Roast for another 5-7 minutes.

How to prepare Caramelized onion

Cut the onion into halves and into slices. Stew it on medium heat for about 20 minutes until tender. Remove the lit and let the water evaporates, if there is any. Cook until it is golden brown. Add sugar and salt, finely chopped garlic and black pepper. Add some balsamico and let it stew for additional 5 minutes until the smell of vinegar evaporates.Pour it in jars and seal. Turn the jars with their bottoms up.

Potato gratin with Delishu   I share an easy and healthy recipe for one of the tastiest and preferable specialty from the menu of the missed by everyone Soma Vital Food restaurant. Only two vegetables are mixed in the meal together with  some herbs, spices and the revolutionary cultured cashew product Delishu which, so far, […]

Bruschetta with Delishu and squash

The combination between the sweet squash and the tender taste of Delishu over a toast sends mi into the clouds and I don’t need anything else. Or , maby, a glass of red wine. And a film. Today I share a favourite recipe for a quick and easy appetiser with which I surprised my […]

ATTENTION !!! This recipe may cause you to drool in a specific way, an acute desire to eat Delishu and may also lead to a permanent addiction. The good news is that it is absolutely tasty and healthy. And you can prepare it easily at home.   Required ingredients for Zucchini vegan sushi rolls   […]

Inspired by the narrow Italian cobblestoned streets with small cozy restaurants, at the corner of the street, covered with red-checkered tablecloths tables and amazingly delicious pasta. I dreamed about Toscana and decided to share a recipe a new version of the Tagliatelle with asparagus, walnuts and Delishu Bio Boletes and Bio Thyme.   Required ingredients […]